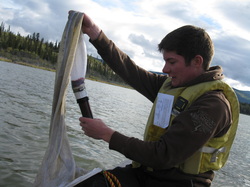 Limnology (the study of lakes and other freshwater systems) is the science that can provide improved understanding of lake ecosystem dynamics and information that can lead to sound management policies.  As more studies are conducted on a variety of lake systems, the accumulated information leads to the development of general concepts about how lakes function and respond to environmental changes.

The condition of a lake at a given time is the result of the interaction of many factors—its watershed, climate, geology, human influence, and characteristics of the lake itself.  With constantly expanding databases and increased knowledge, limnologists and hydrologists are able to better understand problems that develop in particular lakes, and further develop comprehensive models that can be used to predict how lakes might change in the future.  While the development of a limnological database and knowledge is important, no amount of generalization can provide a full understanding or predict conditions of any particular lake.  Each lake system is unique, and its dynamics can be understood only to a limited degree based on information from other lakes.  Just as a physician would not diagnose an individual’s medical condition or prescribe treatment without a personal medical examination, a limnologist or hydrologist cannot accurately assess a lake system or suggest a management strategy without data and analysis from that particular lake and its environment.
from: http://wi.water.usgs.gov/lakes/index.html

Bathymetry is the study of underwater depth of lake.  It is the underwater equivalent to topography.  Bathymetric charts are typically produced for safety of surface navigation, and usually show depth contours (isobaths).  Bathymetric maps may also be used to calculate lake volume which in turn may be used in determining the lake's biological processes.  The size and form of lakes regulate many general transport processes, such as sedimentation, resuspension, diffusion, mixing, burial and outflow.  This in turn regulate many abiotic state variables, such as concentrations of phosphorus, suspended particulate matter, many water chemical variables and water clarity.  These factors regulate primary production, which regulate secondary production, for example of zooplankton and fish.

Wetlands   Wetlands help maintain and improve the water quality of our nation's streams, rivers, lakes, and estuaries.  Since wetlands are located between uplands and water resources, many can intercept runoff from the land before it reaches open water.  As runoff and surface water pass through, wetlands remove or transform pollutants through physical, chemical, and biological processes.  For example, the Congaree Bottomland Hardwood Swamp in South Carolina removes a quantity of pollutants from watershed water resources equivalent to that which would be removed by a $5 million water treatment plant (USEPA 1995).  In another case, scientists estimate that a 2,500 acre wetland in Georgia saves $1 million in water pollution control costs annually (OTA 1993).
Nutrient Removal    Scientists have estimated that wetlands may remove between 70% to 90% of entering nitrogen (Reilly 1991; Gilliam 1994).  Riparian forests can reduce nitrogen concentrations in runoff and floodwater by up to 90% and phosphate concentrations by 50% (Gilliam 1994).  The estimated mean retention of phosphorus by wetlands is 45% (Johnston 1991).  Wetlands with high soil concentrations of aluminum may remove up to 80% of total phosphorus (Peterjohn and Correll 1984; Richardson 1985; Gale et al. 1994; Walbridge and Struthers 1993).
Removal of Biological Oxygen Demand from Surface Water   Biological oxygen demand (BOD) is a measure of the oxygen required for the decomposition of organic matter and oxidation of inorganics such as sulfide.  BOD is introduced into surface water through inputs of organic matter such as sewage effluent, surface runoff, and natural biotic processes.  If BOD is high, low dissolved oxygen levels result.  Low dissolved oxygen levels can lead to mortality of aquatic life.  Wetlands remove BOD from surface water through decomposition of organic matter or oxidation of inorganics (Hemond and Benoit 1988).  BOD removal by wetlands may approach 100% (Hemond and Benoit 1988).
Removal of Suspended Solids and Associated Pollutants from Surface Water  Suspended solids (such as sediment and organic matter) may enter wetlands in runoff, as particulate litterfall, or with inflow from associated water bodies.  Sediment deposition in wetlands depends upon water velocity, flooding regimes, vegetated area of the wetland, and water retention time (Gilliam 1994; Johnston 1991).  Sediment deposition in wetlands prevents a source of turbidity from entering downstream ecosystems.  Typically wetland vegetation traps 80-90% of sediment from runoff (Gilliam 1994; Johnston 1991).  Less than 65% of the sediment eroded from uplands exits watersheds that contain wetlands (Johnston 1991).
Removal of Metals   Certain wetlands play an important role in removing metals from other water resources, runoff, and ground water (Owen 1992; Gambrell 1994; Puckett et al. 1993).  Wetlands remove 20% - 100% of metals in the water, depending on the specific metal and the individual wetland (Taylor et al. 1990).  Forested wetlands play a critical role in removing metals downstream of urbanized areas (Hupp et al. 1993).
Removal of Pathogens   Fecal coliform bacteria and protozoans, which are indicators of threats to human health, enter wetlands through municipal sewage, urban stormwater, leaking septic tanks, and agricultural runoff.  Bacteria attach to suspended solids that are then trapped by wetland vegetation (Hemond and Benoit 1988).  These organisms die: after remaining outside their host organisms, through degradation by sunlight, from the low pH of wetlands, by protozoan consumption, and from toxins excreted from the roots of some wetland plants (Hemond and Benoit 1988; Kennish 1992).  In this way wetlands have an important role in removing pathogens from surface water.
from http://www.water.ncsu.edu/watershedss/info/wetlands/values.html